Motherwell travel to Leith on Saturday hoping to end Hibs perfect start to the season.

Jack Ross took the reins last November and lifted the spirits of the Easter Road faithful with a nine point haul after three games.  They have scored seven and conceded two, neither from open play.  It would upset the odds if Motherwell were to come away with the points.

After the 4-1 demolition of Livingston last weekend our opponents needed a second half goal from Christian Doidge to ease them past Dundee United.  They can match an almost 50 year record if they complete an opening fourth win on Saturday. 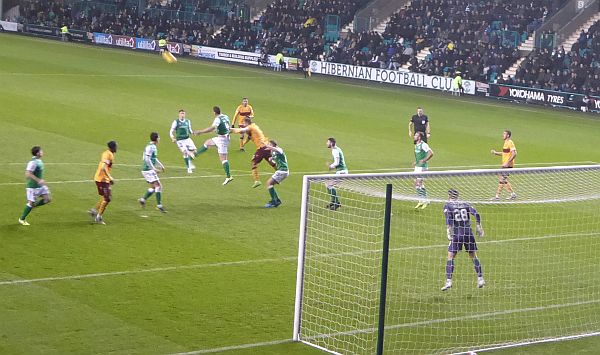 Motherwell’s recent record at Easter Road is poor.  Our last win was seven years ago when Henri Anier scored the only goal of the game.

Stephen Robinson made his feelings clear after Wednesday’s meeting with Livingston.  He had watched his charges win the first point of the campaign but few reckoned we deserved more despite taking the lead twice.

After three outings there is little resemblance to the side that shot to third place last season.  What is more of a worry is that the manager suggests that a few are not delivering the work rate he expects.  That is a characteristic that is rarely missing even when games are lost.  He “expects a reaction”.

Regardless of the commitment of players to the cause there are a few problems to be solved.  The continuing left back void has been filled by an uncomfortable Ricki Lamie and we will miss Liam Donnelly’s versatility.  Although Callum Lang has served his two match the manager has yet to settle on the best attacking team.  Competition for places is all well and good but nothing breeds confidence like a settled partnership.

We may see a more determined Motherwell side on Saturday but it is unlikely to be a winning one.  The struggle is likely to continue after a 2-0 loss.

The club has announced the signing od Stephen O'Donnell on a short term deal (January).  This should ease our defensive problems somewhat.