Next up - Livingston at Fir Park

Motherwell and Livingston meet at Fir Park on Wednesday with both teams seeking to open this season's account.

Stephen Robinson has talked of his side's inability to convert chances after watching his team lose both openers 1-0.   Single goal defeats to Ross County and Dundee United were not part of his plan. 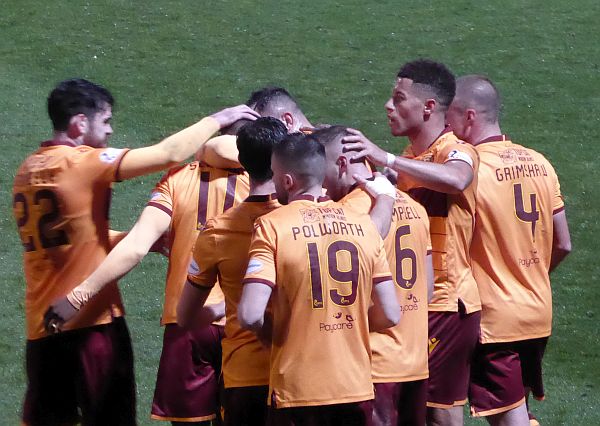 Alan Campbell scored against Livingston last season - in there somewhere

The manager is not in the habit of making wholesale changes after a couple of poor results but he has sufficient depth in his squad to make a few tweaks.

The need to avoid a third consecutive defeat will play on the minds of both managers but the onus to go forward will bear more on the home team.  A moment's inspiration or a lucky gift will be welcomed.

Gary Holt will be very familiar with the strengths of our central defensive pair given that they wore the Livingston colours for a few seasons.  Livingston conceded four against Hibs on Saturday and as a result they are one of only two teams below us in the early table.

Despite all the attention paid to Lyndon Dykes in recent weeks he remains on the books at Almondvale.  He scored from the spot against Hibs and his former team-mates will know of his potential.

The bookies have us listed as favourites. Let’s hope their judgement is correct as we turn the corner with a 1-0 home win.