Next up - Motherwell at Tynecastle

Motherwell and Hearts meet at Tynecastle on Saturday.  Can the Steelmen come out on top in this clash of third v fourth?

Hearts have yet to be beaten in this season's league campaign and four wins and three draws currently give them a one point advantage over Motherwell.  Their good form having returned to the top flight after a year in the Championship and the completion of the transfer of ownership to their fans' group have combined to restore some pride in Gorgie. 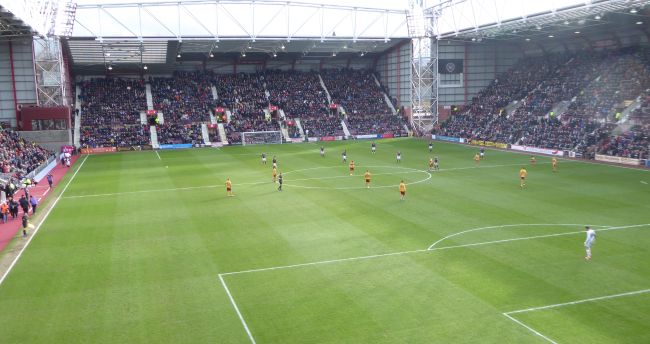 Liam Boyce has scored in five of the seven league matches and with nine in total he is clearly their main goal threat.  His encounters with the 'Well defence will be one of the key factors in the game.  With Craig Gordon camped behind three central defenders it's no surprise that a couple of clean sheets were logged in their last two home games.

Graham Alexander's has made it known that his team will approach every match with a positive plan of attack.  The favoured 4-3-3 formation has served well in recent weeks and we can expect that to continue.  Forwards Tony Watt, Kevin Van Veen and Kaiyne Woolery will probably start for the third consecutive game.

Tynecastle will be of interest to more than football fans this weekend as it will provide a first opportunity to test the so called vaccination passport scheme.  Fans must be able to show proof of double vaccination or exemption to gain entry to the stadium.  Failure to satisfy the spot checkers will prevent entry. A pdf version of vaccination record can be downloaded here and a new app for android and apple devices will soon be released.

Remember the last visit to Tynecastle?

Tomorrow’s cinch Premiership fixture against Motherwell will be used as a trial run for COVID passport checks and no supporters will be refused entry for failing to produce a vaccination certificate.