Next up - Partick Thistle

Motherwell will entertain Partick Thistle on Saturday knowing that a win will maintain a place in the top half of the table.  Thistle will be hoping for a first league win of the season.

The visitors have taken only three points from their seven attempts this season.  The trio of draws came against Ross County, Rangers and Hearts in September after a barren early start to the campaign. 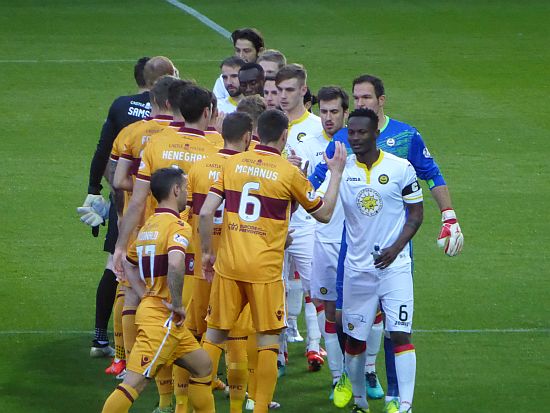 They were 10 minutes away from their first win last weekend when Hearts snatched a point thanks to a favourable decision by the officials.  Devine appeared to have had a successful goal line clearance but a goal was awarded.  The incident provides more ammunition for those supporting the introduction of video technology into our game.

Notable additions to the Firhill squad over the close season include Storey from Aberdeen, Spittal from Dundee United and McGinn from Chesterfield. Sammon also joined on loan from Hearts.

Despite the 1-0 loss to Aberdeen on Sunday the Motherwell squad will remain in confident mood.  Several players have noted that the manner of the victors’ celebrations was a testament to the standing of the Fir Park team and with a place in next month’s Betfred semi-final as a reward we can be sure that there will be no let up in effort.

Rose has returned to training after his hamstring tweak and it would not be a surprise to have him return though Bigirimana would be disappointed to return to the bench.  The manager relealed that Rose has other things on his mind this week - his wife went into labour on Thursday morning. Dunne and Hammell will compete for the left back slot while Frear, back in action for 20 minutes on Sunday,  will be looking for more involvement.

Our league wins have come against Hearts, Ross County and Kilmarnock  and Saturday’s match offers a chance to increase the gap over Partick Thistle to 10 points.  Even at this early stage in the campaign that would be a significant factor in long road ahead.  We have every reason to anticipate a 2-0 win.