St Mirren will provide the opposition for Motherwell at Fir Park on Saturday as the season reduces to the last three fixtures.  Success has gone with the away team in the three earlier meetings, now it's time for a home win.

The Paisley side have a firm hold of the play-off spot and are hoping to close the two point gap with Hamilton and reach the safety that comes with tenth place.  Improved form in April has boosted their chance of catching our neighbours; a win, two draws and a loss have delivered five points from a possible twelve. 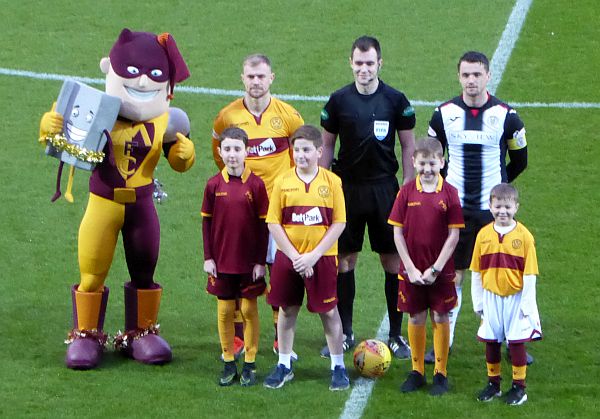 Their determination to scramble for points is well illustrated by an ability to recover from losing the first goal.  They were behind in each of the last three games yet lost none.  A goal in the 90th minute last Saturday earned them a point and coincidentally kept St Johnstone well in our sights as we chase seventh place.

St Mirren are encouraging their fans to get to the game and they are laying on a couple of buses to boost the South Stand support.

Confirmation that Jake Hastie will leave Motherwell at the end of the season came on Wednesday and we can assume that we have seen the last of him in claret and amber.  Fortunately the evidence from Saturday's 4-3 win over Dundee is that we are well able to cope without him.

James Scott may be given more game time and start ahead of Curtis Main and Jamie Semple will be hoping to come off the bench a little earlier than 92 minutes!  Chris Cadden seems to be back to form and we can expect to benefit from his powerful forward runs.

St Mirren won on their last visit to Fir Park when we were in the December slump but it is unlikely that any Paisley punters will collect on the 3/1 odds available for an away win.  Let’s go for a 2-0 home win.