Motherwell aim for a first win in six when St Mirren visit Fir Park on Saturday.

The teams have yet to meet this season as Covid-19 complications forced the scheduled fixture in Paisley to be called off.  The SPFL then awarded the game to Motherwell. 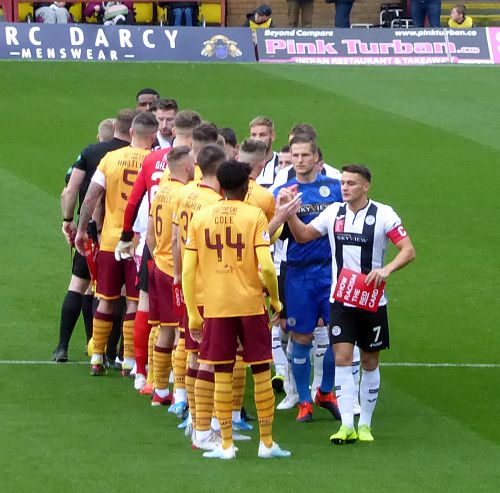 St Mirren, despite their position at the foot of the table, will be in good spirits, irritation at the authorities notwithstanding.  If recent results are any indication of future performance they are entitled to point to a win and a draw against Aberdeen as evidence that their form is on the way up.  The Dons lost 2-1 at St Mirren Park in the League Cup then returned the following week in the league for a 1-1 draw.

The main goal threat from the visitors comes from Jon Obika.  He scored three against Motherwell last season but his team has scored only eight in the league this campaign.

Stephen Robinson delivered his verdict following last week’s defeat to Hibs with a vein of frustration running through his analysis.  A ‘goal’ inexplicably chalked off, a header deflected by the post combined with poor defending amounted to a surrendered lead and points lost.

He will hope that Devante Cole’s hamstring heals quickly but it may be that his partnership with Tony Watt cannot resume this weekend.  There may be a return for Jordan White following a calf injury sustained two weeks ago.

The fixtures after this meeting with St Mirren have Motherwell playing Rangers then Aberdeen.  The importance of this game is clear, time for a 2-0 win.