Next up - the cup

The end of the winter break is in sight and the build up to the second half of the season will increase as we anticipate the fourth round of the Scottish Cup.  Motherwell and Rangers will provide a tasty opener.

Motherwell last made a cup final appearance in 2011 and despite a disappointing loss to Celtic the adventure offered fans a great cup run and delivered a healthy financial bonus to the club.  Since then we have struggled to make any impact in the competition. 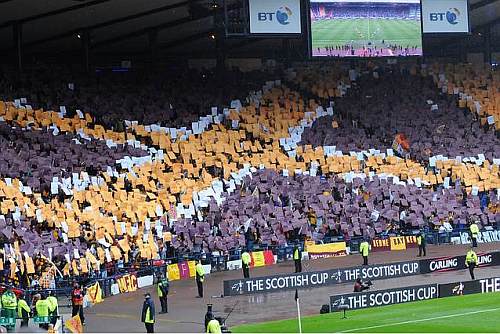 When will we see this again?

After comfortable home wins over Queen's Park and Morton we crumbled to a dismal defeat by Aberdeen.   A combination of poor refereeing, injuries and a missed penalty ended our interest at the quarter final stage.  The three game run has not been matched since.

A tough trip to Pittodrie was not a welcome draw but when Murphy produced a terrific goal to give us the lead with only ten minutes remaining we had our chance.  Unfortunately McGinn's last minute header beat Hollis to force a replay.  We got our reward for a poor performance at Fir Park and lost 2-1.  The defeat sealed a horrible few months.   The sad tale of the season was that before Christmas we had played seven cup games (2x Champions League, 2x Europa League, 1x League Cup and 2x Scottish Cup) without a win.

By some distance this was the worst cup defeat in the club's history.  We were paired with lowly Albion Rovers and lost.  The game was played on Hamilton's artificial surface and the 'Wee Rovers' kept us out.  Their last minute goal was their first competitive win against us.  The FPC report listed - The Guilty Men: Nielsen, Hammell, Hutchinson, Kerr, McFadden (Leitch 71), Carswell, Lawson, Francis-Angol(Lasley 71), McHugh(Sutton 45), Anier.

We were given a home draw and hosted Dundee United for this round four tie in November 2014.  Another early exit followed.  Ojamaa gave us a first half lead but two headers in the second quashed any hope of a run to Hampden.

Cove Rangers came to Fir Park looking to cause an upset but a goal from Louis Moult in the first minute gave the 300 travelling fans a reality check.  After the 5-0 win we were paired with Inverness  in the fifth round.  We had been suffering from a bout of late goal sickness at the time and with a replay looking likely at 1-1 in the 90th minute we conceded.  It was a cruel exit.

What will happen at Ibrox?