On This Day - Mio scored his only 'Well goal

Miodrag Krivokapic scored the only goal in his spell with Motherwell on 23 April 1994.  It prompted one of those great celebrations when players and fans come together to share a magic moment. 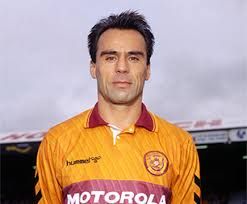 Mio was one of the finest footballers to wear a Motherwell shirt.  The following extract from Issue 60 of the Great Leap Forward illustrates why the goal was so special.

“Close your eyes, and picture the scene.It's old Easter Road,the ‘Well fans are scattered around the terracing behind the wire fence. Mio runs the length of the pitch to support a MFC breakaway. The cross comes in,Mio meets it perfectly. The ball's in the net and the fans go wild,as does the scorer who jumps onto the fence and screams.

“Seventy eight appearances in Claret and Amber,with one goal, and I was there.I saw it. Mio had been a Dundee United legend, and of course played in the 1991 Cup Final for the Arabs.

“When they had deemed him finished,Motherwell came calling and the rest, as they say,is history. Quite simply he was the most cultured centre back I've ever seen in a Motherwell shirt. He was part of a Fir Park side that so nearly won the Premier League Title and that had played truly breathtaking football.

“He went on to become a Coach at Fir Park and briefly a co-manager ( and undefeated ! !) with Big Softy, before Eric Black and Terry Butcher took over. Dunno what he's up to now, but surely he's got talent that should be passed on to others. The gift the big Yugoslav had was something I'm grateful to have seen at such close quarters.”

There are hundreds of fanzine pages available at the GLF archive.