Motherwell were widely praised for their performance at Ibrox but that is small compensation for the loss of the game.  The manager got the tactics right but we failed to hold on for a point.

Stephen Robinson, speaking to MFC after the match, reckoned that his team should have had some reward.  "I thought we deserved at least a point." 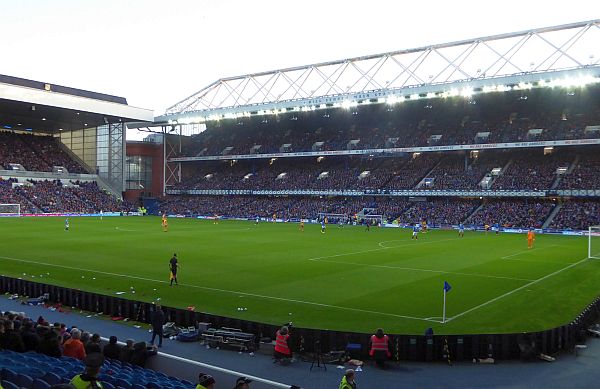 The view from the away enclave

"Credit to the players, they did all that was asked of them.  I'm proud of the boys but extremely frustrated because we definitely deserved something.

"We gave [Rangers] more than a game.  And I think it shows how far we've come.  We came here and passed the ball brilliantly at times.  I thought the three midfield players were outstanding.

"The challenge now ...is to take this into the Kilmarnock game.

The combination of Chris Long and Devante Cole as twin strikers worked well. It was a surprise that we started without either Sherwin Seedorf or James Scott in a wide forward position but the pair selected pressed and attacked as the opportunities appeared.

Bevis Mugabi made a good impression and he demonstrated to the manager that he is worthy of more game time.  The club should be making efforts to ensure that we tie him up beyond the January end of his contract.

There are two games at Fir Park this week. Kilmarnock visit on Wednesday to end the first round of fixtures before Livingston arrive on Saturday.