Motherwell were handed a cruel lesson late on Saturday afternoon.  They had worked hard for an hour and earned a deserved lead only come away pointless.

Ross County set up a defensive stall and for most of the game they kept us out.  The attacking flair that produced our run of three league wins was, for the most part, missing.  Things may have turned out differently has Declan Gallagher’s ‘goal’ not been disallowed but we were to take the lead with 30 minutes remaining. 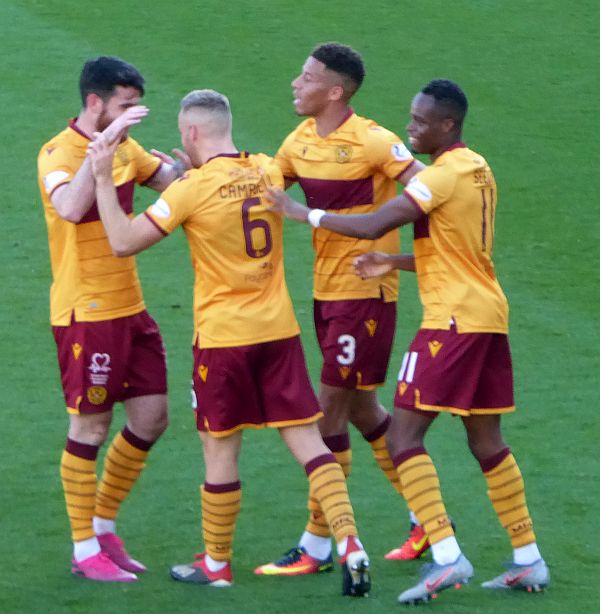 An hour gone and we were happy

Our goal was well constructed and precisely finished.  Devante Cole gave us a glimpse of the skill that caused our interest over the summer when his quick footwork allowed a turn in midfield and a forward run.  His delivery allowed James Scott a single touch to present the perfect ball for Allan Campbell.  The placement gave the ‘keeper no hope and many in the Cooper Stand were already on their feet before the ball hit the net.

On the face of it the game was over.  The visitors had made occasional ventures into our penalty area but the predominant flow of the game was with Motherwell.  Second place in the table was within our grasp.

The Highlanders stepped up their game and added firepower with their substitutions.  Michael Gardyne was allowed an unchallenged run through midfield before Brian Graham slotted beyond Mark Gillespie.

Then Jake Carroll lost his discipline with two fouls against Ross Stewart.  The dismissal follows his two match suspension earned at Livingston and he will be unavailable for several matches.

The red card gave the visitors a further boost and when O’Hara sold himself against Richard Foster in front of the Well Bois we lost the game.  The cross was good and Stewart headed across Gillespie to score.

The afternoon started in bright sunshine on a perfect pitch but by the end we trooped from the ground muttering that we had seen it all before.

Poor Keith Lasley, it was not the 40th birthday party he deserved.