Motherwell have not won a game since Halloween.  A solitary point against St Johnstone offered brief respite but the four defeats matched the gloomy onset of dark winter nights.

Few could argue with the manager's immediate conclusion that "it's just not happening for us". 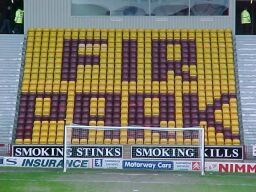 Situations similar to this are not unfamiliar to Stephen Robinson. In last season's truncated campaign there was an eight game stretch without a win between Burns Night until the end of February.  Before that there was a six game run in the autumn of 2018 that yielded one point and a Betfred exit and in the 17/18 season that had us in two national cup finals there was a horrific nine game drought that yielded two points.

Motherwell supporters are all too familiar with these slumps and respond with the instinctive cry for a change at the top.  Stuart McCall, Ian Baraclough and Mark McGhee have been sent on their way in the last decade but the current manager will be given time to steady the wobbly ship.

A trip to Ibrox next weekend will do little to ease the pain and the manager's shoulders will likely feel an added burden as the lean spell continues.