The season starts at Hampden

Motherwell and Queen's Park begin their quest for the Betfred Cup at Hampden on Saturday.  Stephen Robinson has expressed a desire to return to the stadium later in the year, so say we all!

After a week in a training camp the Motherwell squad embarked on a series of four warm-up matches.  Results were mixed and suggest that there is lots of room for improvement.  Of the team that started Tuesday's match in Barrow five are new to the club and much work remains in building an understanding. 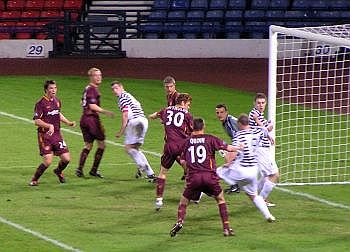 A stab at a possible starting eleven might see Carson in goal with a defence of Tait, Heneghan, McManus and Hammell, Cadden, Bigirimana, McHugh and Frear in midfield with Fisher and Bowman leading the line.  Moult, the subject of much speculation, has just returned to training and we'll miss his finishing abilities.

Our hosts have been celebrating their 50th anniversary but we’ll be hoping that their celebrations end this weekend.  Manager Gus McPherson has added a handful of players from the junior ranks to his League 1 squad and although their strengths will not be known to our team we can expect no shortage of enthusiasm as they look for a cup shock.

The game will be broadcast on BT Sports – an unusual event for a 3pm kick-off on a Saturday.  Gate prices are set at £12 for adults and £6 for concessions.  These rates will apply for all matches in our section of the draw.  The other teams in Group F are Morton, Edinburgh City and Berwick Rangers.

We last met Queen's Park in the League Cup at Hampden in 2006.  On that occasion we had a comfortable 3-0 success thanks to a Richie Foran hat-trick.  We will be short of a prolific goal-scorer for this visit but surely we should expect at least a 2-0 win.

Have you entered the FirParkCorner Prediction League?