They Were The Greatest

Motherwell fans chose their Greatest Team at a Fir Park gala night on 25 March 2007.  There have been several repeats of the idea since this first version thirteen years ago but the players honoured at this event still stand the test of time.

Andy Paton was awarded the title of 'Greatest Motherwell Player' at the tribute evening on the Sunday evening. Around a thousand 'Well fans turned up to see the unveiling of 'The Greatest Ever Motherwell Team'.  Here's what they saw.

The stage faced the South Stand and the audience filled the lower centre block.The bottom half was reserved for the corporate customers and invited guests. Peter Martin and Tam Cowan took the audience through the proceedings and they kept the troops entertained with the usual football banter. 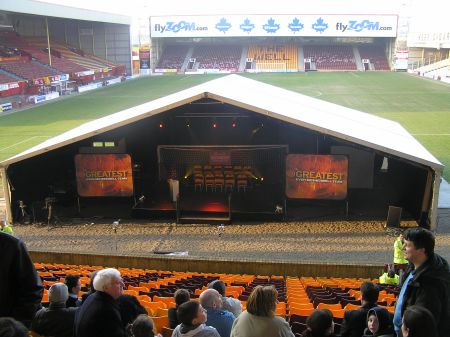 These events, when the fans vote for favourites, are always subject to the age and habits of the voters. It was no surprise to see the evening dominated by awards to members of the 91 Cup team but it was heartwarming to see how much the top award meant to Andy Paton.

He remarked to the Wishaw Press -

“This is a mighty achievement — I couldn’t talk when my name was announced as the winner and I’m so delighted and proud to have won the trophy.

“I appreciate very much the fans who voted for me; this honour means a great deal to me because I was a Motherwell supporter even before I got to play here.

“My father Tommy and Sailor Hunter played together in England and that was one of the reasons I came to the club; and when I lifted the league cup at Hampden I was especially pleased for old John Hunter.

“Winning the trophy that day [with a 3-0 defeat of Hibs in the 1950-51 final] was a notable moment in my career; that team had been together since just after the end of the war.

“Eventually we won the League Cup and then won the Scottish Cup the following season, but in that period we were at Hampden various times playing in finals and semi-finals.

“I had 16 years at Motherwell and I enjoyed playing at FirPark; I was always prepared to give my all for the team and I’m very pleased to have won this award.” 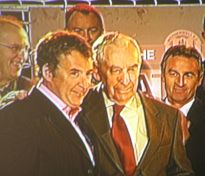 The audience was sprinkled with names familiar to Motherwell fans and the night was professionally organised and ran smoothly.  A DVD will be produced and it will no doubt become a requirement for those who collect club memorabilia.

As the cheap seats emptied, half of the audience retired to the marquee which occupied the training pitch behind the East Stand. It looked like a bit of a party was about to start. 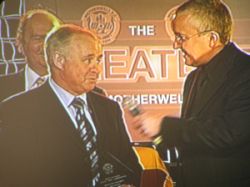 Presentations were made to commemorate the 31/32 Championship winning team (McFadden collected it) and Charlie Cox received a memento on behalf of the 52 cup team.

All but three of the team listed below were on hand to take their place on the stage.


Finally, and to deserved applause, Andy Paton was honoured with the title 'Greatest Motherwell Player' - John Boyle made the presentation.