Tony Watt has agreed an extension to his contract and added another season.  He will be at Fir Park until 2022. 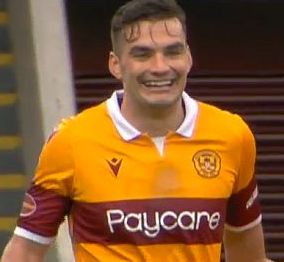 The striker joined Motherwell in February and agreed to prolong his stay for the current season over the summer.  His form and enthusiasm for his home town club have resulted in a new deal to keep him in claret and amber until the summer of 2021.

“I’m delighted to have signed another deal.

“The club have been great with me and I was really keen to stay longer. I’m settled and I feel like I am getting better and better here.

Watt has scored four times this season, two in the Europa league and thw in the SPFL Premiership.  He will have eyes on McDiarmid Park for his next opportunity to add to the tally.

He has steadily worked his way into the plans of Stephen Robinson who has been delighted at the progress of the striker.  He said, “Tony has been fantastic since he came to the club.

“He has worked his way to fitness to show us the player he is capable of being. He deserves this recognition.