I can't remember much of what was going on on the pitch between the full time whistle and the start of extra time. I do have a clear memory of thousands of 'Well fans wiping away tears and launching into song again. There are some moments that words cannot describe. 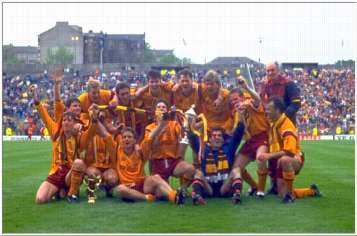 These moments are quite simply life changing. These moments will stay with every 'Well fan and the players for the rest of their lives. Can you imagine sitting in the centre circle in claret and amber having had the Scottish Cup wrestled from your grasp? Destined to spend an eternity being known as the team that should have won the Cup in '91? A lifetime of "Smith must score" quips about being two goals up and losing an injury time equaliser?

It was a similar situation to the Scottish Cup final of 1931 - we were two goals up and lost an injury time equaliser. There was no extra time in those days and inevitably we lost the replay. Maybe if that team had tens of thousands of loyal fans backing them before their half hour of need we would have one more bit of silverware in the cabinet. But those days were gone and the Motherwell fans at Hampden in 1991 did as much in those crucial moments as the team did to win the cup for our town and our community.

The Motherwell players who could easily have folded came out like men possessed and we soon had United pinned back in their own half. Within moments, Steve Kirk met a back post header that had goal written all over it. Alan Main produced a miraculous save and the score stayed 3-3. Stevie Kirk however, was a man picked out by destiny. The wonder goal at Pittodrie; the timely winner against Falkirk; a penalty against Morton; the clincher in the semi. His time would come and he would only have to make a couple of minutes more.

A Cooper corner was missed by Main under pressure from Paterson and Griffin and ball bobbled on. If a player was ever born to loiter it was Kirkie and the ball fell in front of his forehead. It was such an easy chance I would have fancied my chances but that's detracting from Pele. Cup Final winners - open goal, three yards out - are never easy and he stuck it away. 'Well fans were in dreamland again and if there was a dry eye in the Motherwell section it burst at this moment.

Astonishingly, Dundee Utd just refused to lie down and die. Almost immediately Darren Jackson turned his man and rattled in a shot that Maxwell struggled to hold and another siege was coming.

Throughout the second half, the claret and amber wall held firm. High ball after high ball was dealt with by the resolute Dossers with everyone from McCart to Cooper helping out at the back. As with all finals, there is a moment of hope for the losing team where their fans believe that their team has salvaged something against the odds. It was particularly cruel for Dundee Utd that they had two moments in the closing period of the game.

The ball was bobbling about the box until it fell to Maurice Malpas' foot sixteen yards from goal. It was his weaker right foot but he could not have caught it any better. The ball flew towards the roof of the net until Alistair Maxwell twisted to deflect the ball over the bar. It was a great save in normal circumstances but when you remember his injuries then it becomes the stuff of dreams. Who knows what damage he did landing on his damaged ribs and stomach from that height.

The resulting corner was swung into the box but only after Colin O'Neill had replaced Davie Cooper. Davie was getting on a bit by then but he had run himself into the ground. It was a superhuman effort and one which typified Motherwell that day. When the ball was once again returned into the box it fell to John Clark - our defence had slipped and for a half second penalty kicks loomed. The final touch of the Cup Final was appropriately from a Motherwell player when Jim Griffin made a frantic block to push the ball into the side netting. Some Arabs celebrated thinking they had pulled out another last gasp equaliser - I can only imagine what pain they felt and I was relieved when they got their success at Hampden eventually.

Thankfully, their day was a few years away and delirious players and fans celebrated together at the Motherwell end of Hampden. Tom Boyd composed himself and milked the occasion as he made his way up the Hampden steps. Shook hands all the way along the presentation row, a kiss for the lady and take the cup. Turn round. Slowly. Almost in slow motion. Break into smile. Raise cup to ecstatic 'Well fans and this was the moment. This was the moment that made all the cup defeats, the thrashings, the relegations and under-achievement for thirty nine years worth it. As everyone knew, Motherwell had not only won the cup, we'd done it "in the most dramatic fashion possible."

pictures from the final