Motherwell fans are getting used to Saturday night celebrations – that’s three in a row.

The winning habit that has broken out for claret and amber clad supporters has brightened the last three weekends and landed the team fourth place in the table.  Only five rounds of the Premiership have passed but the ten points credited to the Fir Park account easily passes the test of what can be considered a good start. 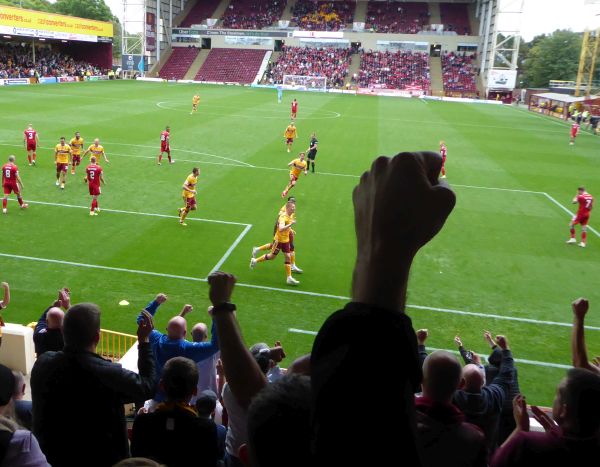 The gap over the lower reaches is already significant and none of the bottom five has yet registered a win.  The icing on the ‘Well cake is that there are definite signs that Graham Alexander’s squad looks fit for purpose.

There is an international feel around the old stadium.  Saturday’s starting eleven had players from Uganda, Finland, Norway and the Netherlands alongside four Englishmen and only three Scots.  The winning goals came from Dutch and Finnish heads to much acclaim from the home fans.

The official crowd figure of 5,632 included 1,406 in the away stand.  The enthusiastic support given to the home sounded as if far more than 4,200 were present and the players reacted accordingly.  There’s no doubt that football provides far better entertainment with the crowd in full voice.

Next up is a trip to Ibrox on Sunday.  No tickets for Motherwell fans are on sale for this match, poor show.