After Aberdeen, before Hibs

Motherwell hope to complete a trio of wins in a week when Hibs visit Fir Park on Saturday.  Dundee and Aberdeen have already fallen, bring on the Hibees.

‘Well wins at Pittodrie are not common but when they do arrive they usually are significantly greater than the routine.  While Wednesday’s 1-0 victory falls short of the triumph that led to the 1991 Scottish Cup or the nail biting conclusion to the 2013/14 season that delivered the runner-up place in the league, this was a massive boost to the league campaign. 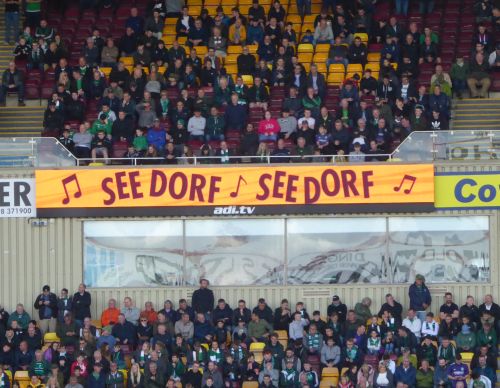 It was a not a game for any but the committed.  Any neutral looking for entertainment would have been seeking a refund well before Liam Donnelly rose to win the game as half-time arrived.  The second period had waves of ineffective red attackers rebuffed by determined white shirts but the points went to Lanarkshire and our grip on third place tightened.

The value of the win in Aberdeen will be devalued if there is a slip against Hibs on Saturday.  The visitors lost an early goal to Hamilton in midweek yet came back to record a first win since their Boxing Day derby  A cup draw with Dundee United last weekend gives them a replay next week, will that be a factor for our meeting?

Martin Boyle has received much praise for his recent performances and we have to remember that Christian Doidge, Florian Kamberi and Daryl Horgan all scored against us at Easter Road in the last pairing in November.  Of course, we remember with more fondness the three from Sherwin Seedorf, Liam Donnelly and Jermaine Hylton that cheered us at Fir Park in August.

Chris Long hobbled off the park in the first half on Wednesday and he must be doubtful but we have shown enough resilience to suggest that a winning way can be found.