Motherwell CEO Alan Burrows is subject to an arrest warrant following his failure to appear as a witness at Hamilton Sheriff Court reports the Scottish Sun. 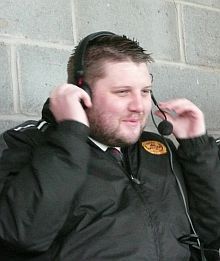 The Depute fiscal told the court that “Mr Burrows is actively refusing to attend court today and I would seek a warrant in respect of him”.

The court case relates to a charge against Sean Baillie alleging that he threw a cup containing hot liquid at Alfredo Morellos when Rangers played Motherwell at Fir Park on December 15 2019.

The petulant striker earned two yellow cards and was dismissed but his team took the points after a 2-0 win.

The non-appearance of Burrows caused the trial to be postponed after the defendant pled not guilty to the charge of culpable and reckless conduct.

The Depute  said, “A member of our team has spoken to Mr Burrows and he said he would not be able to attend due to work commitments.”

"The police were trying to get him this morning on another matter relating to this case but, for whatever reason, couldn't get him.

Motherwell's Winning Run Ends With a Loss to Rangers

Update:  The Sun report now adds "A source close to the club said: "It’s been a misunderstanding and Alan has been in touch with fiscal to rectify the situation."