Has Alexander discovered the winning combination?

On this occasion Graham Alexander elected to reduce the long range barrage from back to front and by selecting Dean Cornerlius, Sean Goss and Callum  Slattery in midfield his team had the option of playing football.  It worked a treat.

Despite the concession of two poor goals (defenders heading the ball against team-mates in front of goal) there was enough attacking power to turn the game before the break. 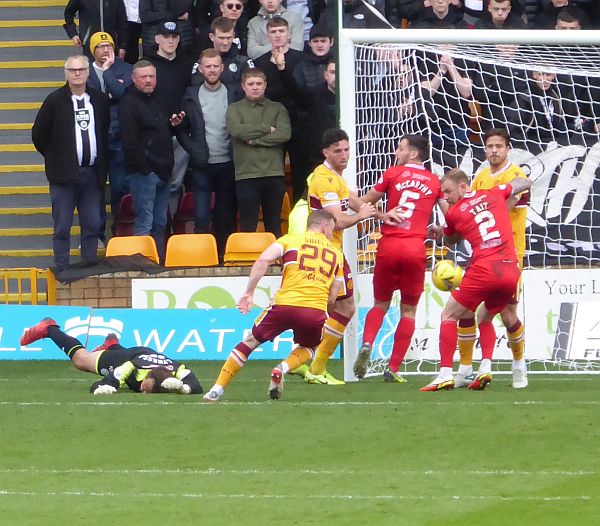 All four ‘Well goals came from fine individual contributions.  Sean Goss drove from the 18 yard line to the ‘keeper’s left hand post to score his first in claret and amber, Conor Shields sprinted from the half-way line with a couple of touches before a sublime right-footed dink into the net, Dean Cornelius composed himself before placing the ball beyond Lyness and an outstanding wide run from Kevin Van Veen ended with a cut back to give Shields his second with a touch at the near post.

The win effectively ends St Mirren’s hope of a top half finish but strong competition for the top six remains with the final round of the regular season to come at the weekend.  Motherwell and Livingston know that a win will lift them above the cup.  If the game at Almondvale ends in a draw then Motherwell will be denied only if Hibs win at Tynecastle and Ross County win at Pittodrie.

Motherwell came from behind to win 2-1 on their last visit to Livingston in August.  A big travelling support will urge them forward hoping for another Saturday night celebration.

'Well Win At Last With A 4-2 Against St Mirren