The point won at Tynecastle on Saturday was the seventh earned against Hearts this season and it secured a top six place for Motherwell.

Stephen Robinson admitted in his post-match interviews to some disappointment that the game had not been won but the feeling in the away half of the Roseburn Stand was that we were content with the draw.

The game could have gone either way after Hearts got the equaliser early in the second half and nerves were taut as we came under pressure in those long additional minutes at the end.

It was a full bloodied affair as both sets of players gave their all for the cause.  Challenges were tough at times as the on-field stoppages testify.  The ball was in the air often as defences pummelled clearances from danger zones.

Allan Campbell’s early substitution gave an opportunity for Barry Maguire to make a contribution and he did well.  Campbell is rarely injured and he will be desperate to make a quick recovery.   Liam Donnelly will now be free of suspension and he’ll be hoping to face Aberdeen on Friday.

David Turnbull was given another twenty minutes and Tony Watt was not called from the bench.  Competition for places is growing. 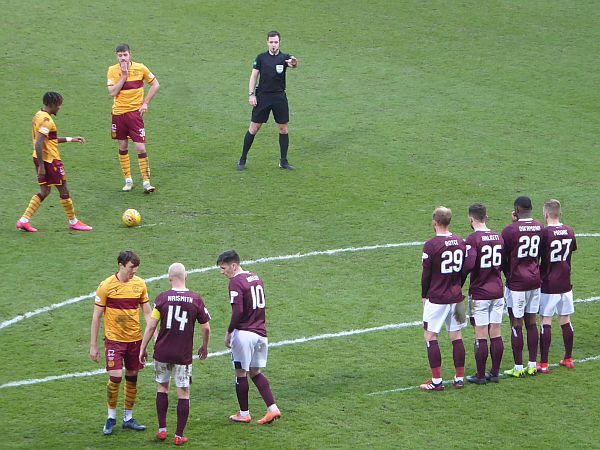 The fact that Motherwell have done enough to ensure a top half place with three games remaining before the league splits is worthy of celebration. The financial benefits from a higher SPFL payout and increased attendances in the last five fixtures will allow planning for next season to begin with confidence.

Chants about a European tour seem less fanciful as does the prospect of finishing in third place.

Regardless of results in remaining games, this has been a good season.