With wins over Aberdeen and Hearts, Motherwell have banished the gloom of a poor October and strengthened their top six credentials.

Any win over Hearts is greeted with enthusiastic celebrations in the Fir Park home stands and Saturday's result gave the singing section an opportunity to serenade the victors well after the final whistle. 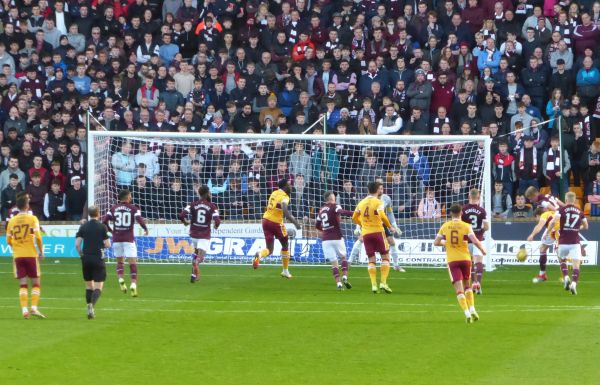 The contrast in Motherwell's performance in the last two games is remarkable.  At Pittodrie the home side dominated for long spells and forced the visitors to defend the last third.  Two second half goals from Kevin Van Veen shocked the Dons and the three points returned to Lanarkshire.

Many 'Well fans expected the on-form Hearts team to take the initiative.  It was clear after the opening five minutes that we had another tactic.  Rather than let the opposition engage a free flowing passing game the object was to snuff it out at source.  Hearts were denied time on the ball as their attempts to build from the back were smothered by the energetic pressing game employed by the claret and amber swarm.

Hearts had lots of the ball but they were unable to create any meaningful action in the Motherwell half until the game was lost.  A well worked move that swept from one penalty box to another with half a dozen passes gave Connor Shields the opportunity to score his first for the club.  Ricki Lamie's conversion from a Sean Goss free kick sealed the win.  At Pittodrie both goals came against the run of play, not so at Fir Park.

Another pleasing factor for Graham Alexander is that he used nineteen players over the two games.  He appears to have developed a squad that can cope with the loss of players whether by injury or suspension without any significant inconvenience.

A busy week follows after the trip to Dens Park next weekend.  Dundee United visit for a floodlit game on the Tuesday before a journey to Easter Road the following Saturday.  A couple of wins from that trio will do nicely.

'Well Give Hearts A Beating