The game at Easter Road reminded us of the thrills and spills that are part of the baggage all Motherwell fans carry.

We were almost in despair a week ago following horrible 4-1 and 3-0 home losses to Hamilton and St Johnstone.  The online chatter backed up the manager's criticism of the team's poor showing.  Injury crisis or not, the product on the pitch was not acceptable. 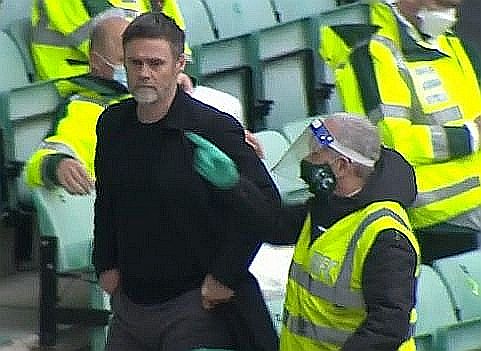 This way to your seat sir

A draw against St Mirren on Wednesday offered some hope.  It was an indication that with committed teamwork there might be a way out of the slump.

The omens ahead of the trip to Leith were not good.  Hibs were third in the table and on a run of four straight wins.  We had not won there since Henri Anier scored the only goal of the game in August 2013 and the bookies quoted an away win at more than 3/1.  Another loss seemed more likely than not.

Motherwell never looked like losing.  Jordan Roberts was presented with his chance thanks to touches from both striking partners and he finished well.  Devante Cole sealed the game immediately after the break.

There have been many occasions in the past when a two goal lead has not looked comfortable.  ‘Well fans are used to the nervous anticipation of the opposition clawing their way back into contention. Not this time.

The last forty odd minutes provided a strangely calm spectacle.  Liam Kelly had to produce a couple of good stops but there was never any fear of a collapse.  The defence seemed comfortable and the whole team played its part in maintaining the clean sheet.

Some of us were tempted to raise a glass or two on Saturday evening to toast the players.  Can we look forward to another wee celebration next weekend?

A Fine Afternoon For Motherwell At Easter Road