Stephen Robinson stepped up to protect his players following Saturday’s loss but there is no pardon for naïve defending.

Speaking to MFC TV on the pitch after the defeat to Hibs the manager referred to the disallowed goal but made clear that it had not cost Motherwell the game.  “We didn’t lose it because of the referee’s decision but changed the momentum of the game”. 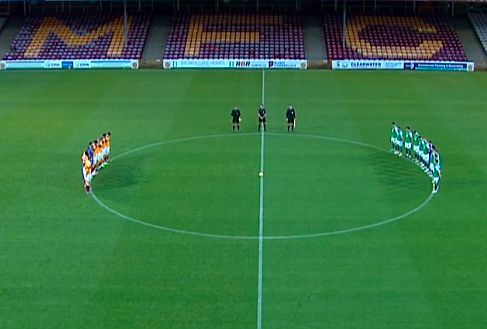 What did disappoint was, again, the careless defending paired with the missed chances in attack.   As the game progressed Motherwell took charge and would have deserved a half-time lead had Andrew Dallas not been minded to deny the opening goal.

It became apparent soon after the break that the tide had turned.  Hibs dominated and within fifteen minutes Martin Boyle, free of any defender, found the ball at his feet and scored from the angle of the six yard box.

The unexpected arrival of six points courtesy of the SPFL sub-committee has softened the loss as far as league position is concerned.  Without the bonus Motherwell would be close to the play-off spot and under growing pressure.

The Paisley Saints come to Fir Park next weekend and with them the chance of a first win since Halloween.  Hard luck tales and envious reflections about the quality of opposition players will not hold much credibility if the bottom side cannot be beaten.

Motherwell Concede Three Second Half Goals And Lose To Hibs