Motherwell and Hamilton meet at New Douglas Park on Wednesday Can the ‘Well avoid a four – nil whitewash?

The horrible possibility that Motherwell could lose all four league meetings with the neighbours across the Clyde must inject some spirit into a team that struggled to overcome Morton in the Scottish Cup. 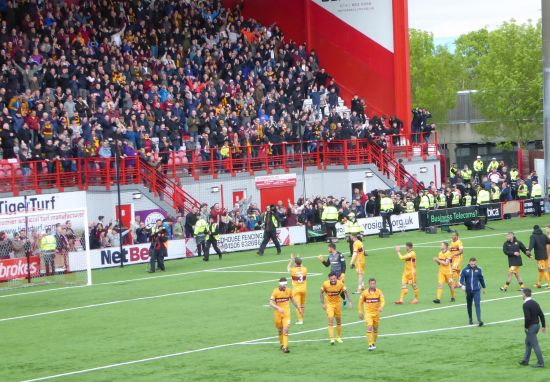 Hamilton players, free of competition last weekend, must have enjoyed the spectacle of their next opponents coming within a whisker of elimination.  The young Accies will be up for the challenge.

The hosts are in desperate need of points.  They are two adrift of Kilmarnock with four games remaining and need wins if they are to move up from bottom spot.  They might be cheered by noting that Hamilton have won only two of the last eighteen games but both of these came against Motherwell.

Graham Alexander used that last transfer window to boost his squad to cope with the number of players recovering from long term injuries.  That decision could bear fruit as he may have to accommodate the loss of midfield lynchpin Allan Campbell.   Tony Watt and Jordan Roberts have been sidelined and their return would provide a welcome boost.

Thoughts of the upcoming cup quarter final should be dismissed as the need to avoid the embarrassment of another derby defeat takes priority.  Let’s hope for the best with a 2-0 away win.

Remember our last trip to Hamilton?