Motherwell on the road against St Mirren

Motherwell are back in action on Saturday with a trip to Paisley.  Will three points return to Lanarkshire?

While seven of the Motherwell squad were involved in international duties, St Mirren were been kept busy with the group stage of the League Cup. 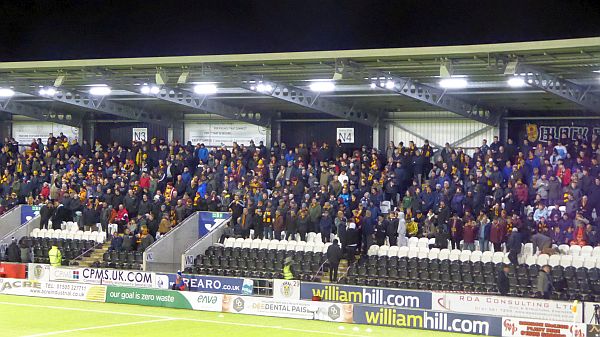 No Motherwell fans in this stand on Saturday

They beat Partick Thistle and had a successful penalty shootout in Dumfries to provide a welcome distraction from their six game losing streak in the league.

Jim Goodwin hopes that summer signing Kristian Dennis will return to his forward line after a month recovering from injury.  With only three goals to their credit in the last six Premiership outings the need for a goal scorer is clear.  They are not the only team that lacks a cutting edge.

It will be strange to see Richard Tait in the unfamiliar black and white strip.  He served for four productive years at Fir Park and we will have to be wary of the ‘former player syndrome.  He has two goals to his credit so far this season.

Campbell was excused midweek duty for the Scotland U21s due to suspension but Declan Gallagher, Stephen O’Donnell, Barry Maguire and Trevor Carson had 90 minutes on the pitch.  The travellers will return in good heart and add to the growing confidence in the ‘Well camp.

Stephen Robinson has kept a fairly stable staring eleven in recent weeks barring variations in the forward area.  Three weeks ago Mothewell had a heavy defeat against Celtic but the bounce from wins over Aberdeen and St Johnstone should widen the gap over St Mirren from one to four points with a 2-0 away triumph.

The game will be available at ppv.stmirren.com for £12.50.

Update: Two St Mirren players have tested positive for Covid-19 and a further one is isolating.  All three will miss Saturday's match.  We hope they get well soon.