Next up - Aberdeen at Fir Park

Motherwell and Aberdeen meet at Fir Park on Saturday as fourth meets fifth in the SPFL Premiership.

After opening the season with five games in August most of the players would be grateful for a free weekend.  Some would use the opportunity to enjoy leisure time while others would focus on building their fitness levels.  A few were occupied with international duties. 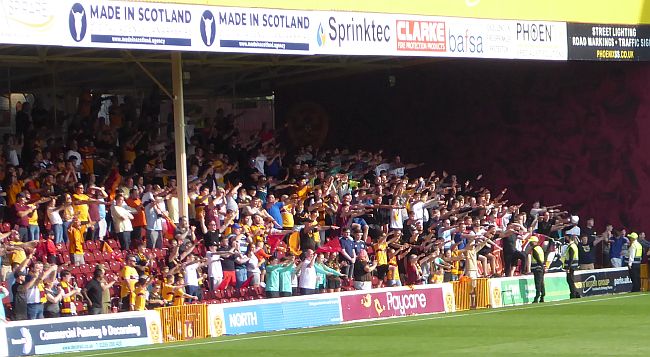 'Well fans celebrate in the sun

Stephen O'Donnell had missed the last three Motherwell outings but after a month's inactivity he was able to make a big contribution to Scotland's midweek triumph in Vienna.  Assuming no adverse reaction to his 75 minute appearance he will likely return to the right side of the 'well defence.  He will be assured of a warm welcome from the fans in acknowledgement of his twelfth cap since he signed for the Mighty ‘Well.

There will be a change on the other flank as Jake Carroll serves the first of his two match suspension having seen red against Dundee.  Nathan McGinley may get the call although the manager has other options.  The summer signing spree included two centre backs; 32 year old Juhani Ojala who has already made three appearances and 26 year old Sondre Johansen, newly arrived from Norway.  Bevis Mugabi and Ricki Lamie have to face stiff opposition for starting places.

While Motherwell are seeking a third consecutive win Aberdeen will be hoping for some joy after a poor run.  Draws against Ross County and Hearts lie beside losses to Raith Rovers and F K Qarabag (twice) to leave the Dons without a win since mid-August.

Declan Gallagher will return to Fir Park for the first time since his departure to Aberdeen in May and we will see Scott Brown in the unfamiliar red shirt.  The visitors’ top scorer to date is Christian Ramirez.  He has scored five since crossing the Atlantic from Houston.

The bookies rate Aberdeen as narrow favourites but a better chance of a return may be available for the draw – 1-1.

Remember the last visit of Aberdeen?