Next up - Aberdeen on Friday

Motherwell and Aberdeen meet at Fir Park on Friday night for a crunch meeting of third against fourth.  Will home advantage tip the balance?

The teams have been exchanging places for months with neither able to make a firm claim to be best of the rest.  Form has been poor; each contender has won only twice in nine league attempts since the winter break but that will not lessen the determination to claim the points. 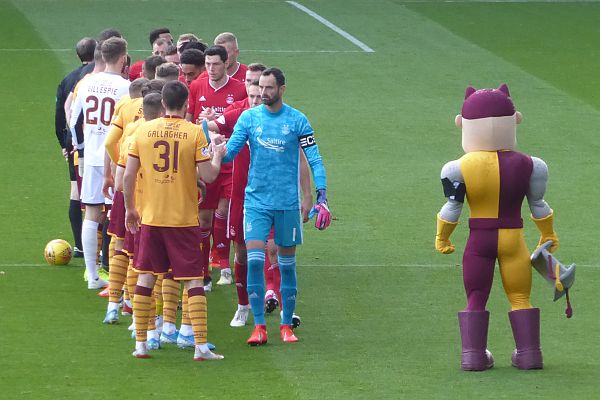 No handshakes on Friday

The visitors have promoted Curtis Main as front man in the last few games as Sam Cosgrove has taken a spell on the bench.  Our former striker will be keen to impress sat Fir Park.

Niall McGinn played a part in all three goals Aberdeen scored against Hibs last week and he will have to be marshalled.    The midfielder scored against us in October when three points went north.  Liam Donnelly evened the score when Motherwell took the points at Pittodrie in January.

Donnelly’s return from suspension is well timed.  Allan Campbell limped off at Tynecastle prompting some doubt about his appearance on Friday.  The extra cover in midfield is welcome.

Tony Watt spent 90 minutes on the bench last Saturday but Chris Long’s goal and his speedy form should see him retain a starting place.  Watt’s hope of a start will be raised if Stephen Robinson elects to play just one winger.

This meeting will have the air of a cup tie.  A home win will deliver a four point advantage while an Aberdeen victory would see them in front by two.  It promises to be an interesting evening under the floodlights.  Maybe both teams will have to settle for a point after hard fought 2-2 draw.

Remember the last visit by Aberdeen?