Motherwell and Hamilton meet on Saturday in a match that current form suggests should be a basement battle.  Between them the teams have gone thirteen without a win.

Despite Motherwell's six and Hamilton's seven game unsuccessful runs there is a twenty one point gap between the teams.  League position suggests this should be a one sided contest but neither camp will be confident of the outcome. 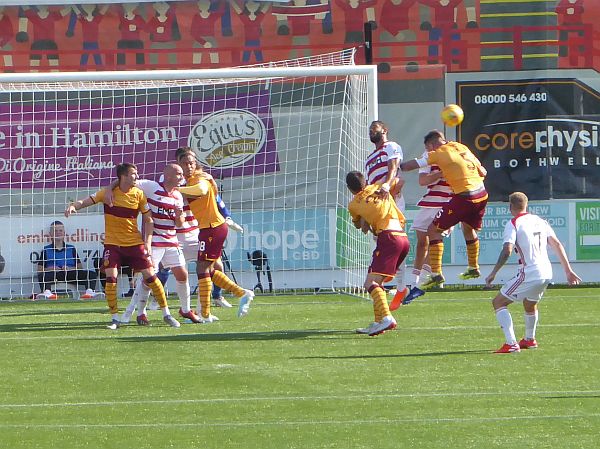 The season’s previous meetings have produced wins for the visiting side and that slim fact is one of the few encouraging signs available to Stephen Robinson’s struggling team.  His woes increased on Tuesday when a shambling performance against St Mirren delivered a cup exit and first half display that raised boos from some in claret and amber.

Jake Carroll hobbled off in extra-time to join the injury list.  There he will find Chris Long and Mikael Ndjoli among others. The loss of Declan Gallagher before the cup tie was a big blow and the status of his recovery will be an important factor this weekend.

Hamilton got a boost with the news that the red card Jamie Hamilton was shown against Hearts is withdrawn.  He will be available for Saturday's game but a feeling of injustice will remain as the ten men lost a two goal lead after his dismissal.

Accies will be without captain Brian Easton thanks to a dislocated shoulder prompting  Brice Rice to remark  that his side were down to the "bare bones" - a sentiment now employed by Stephen Robinson.  There may be a rattling of skeletons at the Fountain of Youth Stadium.

This may be time when relegation fear and the plastic pitch tilt the game to the home side.  With the visitors scrambling for players and a plan they may leave with nothing after a 2-1 loss.

Remember out last visit to Hamilton?