Next up - Killie at Fir Park

Motherwell and Kilmarnock meet at Fir Park on Saturday for a match that matters more to the visitors than the hosts.

Both teams had their Scottish Cup journeys ended on the wrong end of penalty shootouts last weekend and only league interest remains as the season enters the last three rounds. 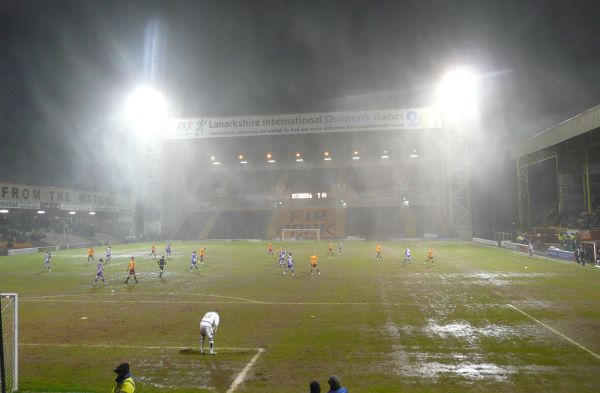 A wet night for 'Well v Killie ten years ago

While Motherwell have a comfortable safety net above the danger zone, Kilmarnock are far from safe.  Ross County, in the play-off spot, are only two points behind.

Tommy Wright was appointed manager at Rugby Park in early February and since then enough points have been added to keep the Killie head just above water.  His key move was to add 33 year old Kyle Lafferty to his squad.  The well travelled striker has scored six goals in his six league appearances and a further four in his two cup outings.

Laffery sustained an ankle injury in training ahead of their quarter final tie on Monday and he will be a doubt for Saturday’s game.

Pride, league position and new contracts will be the spur for Graham Alexander’s team.  The manager will be keen to move up the table but his rhetoric about winning every match will be tempered by the need to consider his plans for the next campaign.

The oversized squad will be reduced in the coming weeks but he will need to make an assessment on those at the edge of regular first team action.  Dundee United and St Mirren lie respectively one and two points ahead but that pair play in the last game on the season so room for advancement remains.

Tony Watt made in impressive return off the bench at Easter Road and, assuming no ill effect, his inclusion in the starting eleven could be the deciding factor.

Remember the last visit of Kilmarnock?