Stephen Robinson spoke through gritted teeth as he tried to stress the good rather than the bad after the draw at Tannadice.

Frustration was evident as he talked of the missed opportunity that would have produced a first long-awaited win since October.

He spoke of “enough chances to win four or five games” yet Motherwell had to settle for only a point after conceding an equaliser in added time.

The requirement now is to ensure that the good positive play that had us in charge of the game is reproduced at Fir Park when Kilmarnock come to close out the year on Wednesday.

This game will be a meeting of two teams in a slump.  Motherwell have not won in the last eight and Kilmarnock have lost five in a row.  Claret and amber optimists can point to the last two games as evidence that form is improving and Messrs Robinson and Lasley will spread that message loudly in the home dressing room.

Alex Dyer also felt the pain of the loss of a late goal as Kilmarnock lost the game against Livingston.  His side have scored only once in their current losing run and now sit beside Motherwell on seventeen points. 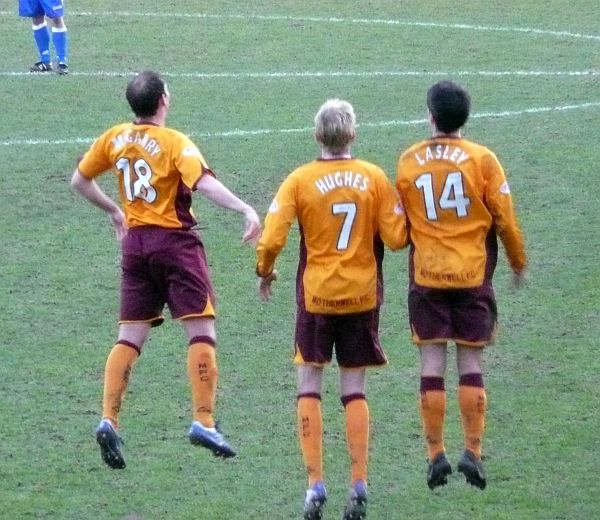 McGarry, Hughes and Lasley jump against Killie in 2008

There might be an air of desperation surrounding Wednesday’s meeting.  Both teams will be glad to see the old year out in the hope that better is to come in the new.  If Motherwell can keep alive the signs of recovery that almost delivered at Tannadice there might be reason to toast the team after a 2-1 win.