Ibrox is the destination for struggling Motherwell on Saturday.  With Rangers riding high the prospects of a surprise seem bleak.

On the face of it this should be a fairly one-sided encounter. Rangers are without a league loss this season while Motherwell have won only four of fifteen league meetings.  Our position in mid-table is bolstered by the disputed six point award courtesy of St Mirren and Kilmarnock. 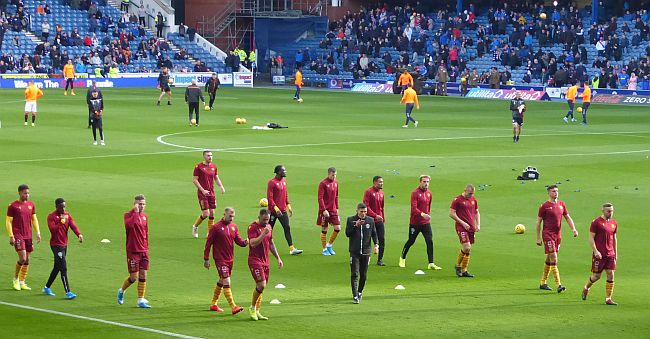 The teams last met in September when the visitors romped to a 5-1 win at Fir Park.  We needed an own goal to get on the score sheet.

Included in Steven Gerrard’s comments after the midweek Betfred Cup loss to St Mirren was the need for his side to bounce back against Motherwell on Saturday.  Alfredo Morelos will complete his two match ban by watching from the sidelines.

The defeat may offer a tantalising glimpse of hope to a Motherwell side that has not enjoyed a win in the five attempts since Halloween.  Stephen Robinson’s frustration at the recent performances has been clear and that is matched by growing restlessness from keyboard complainers.

There are five fixtures scheduled in fifteen days from Saturday.  Ensuring that squad morale remains positive will be a vital task for the management team. That will start by avoiding an embarrassment at Ibrox.

Crazy speculators can risk money on as much as a 20/1 return for an away triumph but a small profit is more likely on a 3-0 home win.

Remember our last visit to Govan?