Motherwell travel to McDiarmid Park on Wednesday for a meeting with eighth placed St Johnstone.  The ‘Well have already taken six points from the Perth side this season but the outcome of this encounter is hard to predict.

Our hosts have recovered from a poor start in the league (no wins in the first nine fixtures) and now have a comfortable eight point buffer from the play-off spot.  They won at Pittodrie last week and came from behind to knock Ayr out of the Scottish Cup at the weekend.

Top scorers for the Saints are Callum Hendry, Stevie May and Alistair McCann, each with four.  St Johnstone have yet to score against Motherwell this season.

There will be some interest in the home stands if Tony Watt makes an appearance.  Motherwell’s latest signing was a regular in Tommy Wright’s side last season providing eight goals. 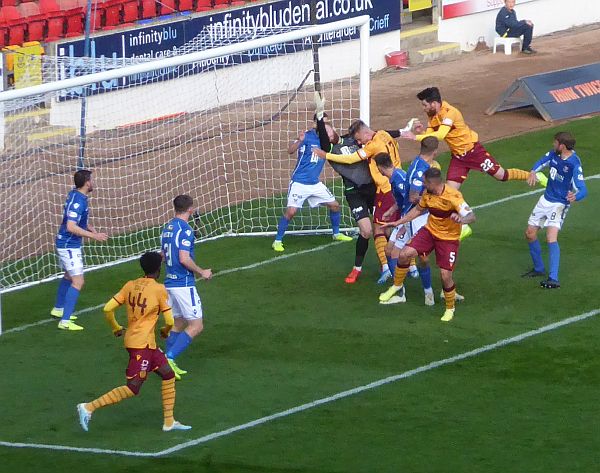 Let's pile in on the 'keeper

Motherwell’s league for has stuttered of late.  Since the win in Aberdeen only one point has been added in three attempts and no goals were scored.  The addition of Rolando Aarons had brought some flair to the wing and the aforementioned Watt was given ten minutes in Saturday’s draw with St Mirren.

Results elsewhere have been kind and we still hold a three point advantage over Aberdeen but if thoughts of a European Tour are to become more than a dream then points have to be collected.  We may get one in Perth, 0-0.