Motherwell travel to Easter Road on Saturday.  Can the encouraging midweek performance in Paisley be repeated?

Graham Alexander was quick to praise his players after the goalless draw against St Mirren.  In the aftermath of two horrible results the players responded with a show of determination that was reflected in the manager’s comments.

The team was boosted by the return of Stephen O’Donnell and Alan Campbell and their steadying influence was apparent.  Jordan Roberts did well in his first start and the new centre back partnership of Ricki Lamie and Tyler Magloire dealt well with all that was thrown at them. 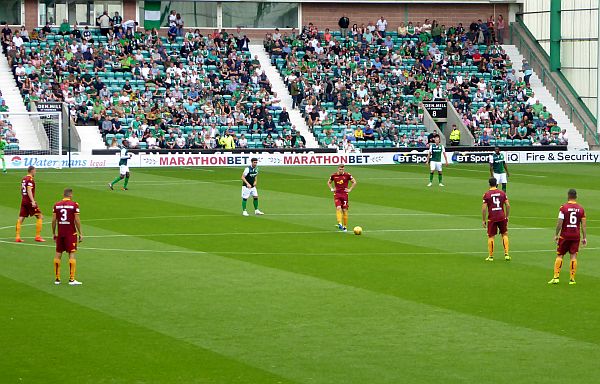 Cadden kicks off in claret and amber

It could be that more reinforcements become available for the game against Hibs.  Declan Gallagher could be back and the appearance of Steven Lawless on the bench on Wednesday must add to the manager’s options.

Hibs are on form with four straight wins giving them a strong hold on third place.  Motherwell have a tough task ahead but a look back to August shows that the first meeting of the teams this season was a stalemate, 0-0.  Hibs enjoyed a 3-0 win at Fir Park during Motherwell’s winter slump and since those fixtures both squads have been refreshed.

It will be strange to see Chris Cadden in opposition garb and he will be in the company of another ‘Well old boy, Jamie Murphy.  Hibs have scored freely this season with Kevin Nisbet, Martin Boyle and Christian Doidge leading the way.

While a win would be welcome, Motherwell may succumb to the form team and return empty handed after a 2-0 loss.