On This Day in 1879 Sailor Hunter was born

On this day 141 years ago a Motherwell legend, John 'Sailor' Hunter, was born.  First as manager then as secretary, he played his part over five decades. 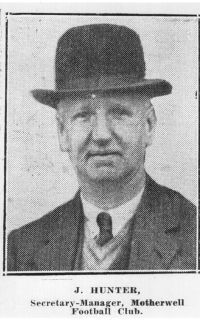 Given the passage of time it is difficult to quantify the magnitude of the contribution he made in his 48 years at the club.  He was appointed team manager in 1911 and his remit was enlarged to take on the job of club secretary.

Under his guidance he saw us grow to challenge the dominance of the Glasgow clubs.  He had an eye for a player and eventually built the team that was to lift the League Championship in season 1931/2.   In addition, Motherwell appeared in three Scottish Cup finals in the 1930s, alas, without success.

He declined offers for his services from big clubs south of the border and remained at Motherwell.  In 1946 he passed the manager’s mantle to George Stevenson but continued as secretary until he retired, aged 80, in 1959.

In 1952, when the Scottish Cup was won for the first time, the trophy was returned in triumph to Sailor at Fir Park.  He was unable to attend at Hampden.

Sailor died in 1966 aged 87 and fifty years later the club honoured this great man in naming that part of the stadium opposite the tunnel The John Hunter Stand.   It is a fitting acknowledgement and one that will ensure that his name and achievements remain not just a part of our history but part of our present.

Read more about Sailor in Eddie Ferguson's tribute to this True Steelman.