One for the diary - Grimshaw Day

In Motherwell circles in years to come 21 August may henceforth be known as Grimshaw Day.

The post-match celebration in front of the travelling support was always going to be enthusiastic.  The team was behind at the break in need of a spirited second half performance to secure the first win of the league campaign.

Tony Watt capped off a fine afternoon by popping up to head home the equaliser but his limelight was eclipsed by Liam Grimshaw.  As the match clock turned to 78 minutes Grimshaw got the reward his anticipation deserved.  Watt's shot was not held by Stryjek in the Livingston goal and those of us fortunate to be at the game were able to witness the Englishman break his duck. 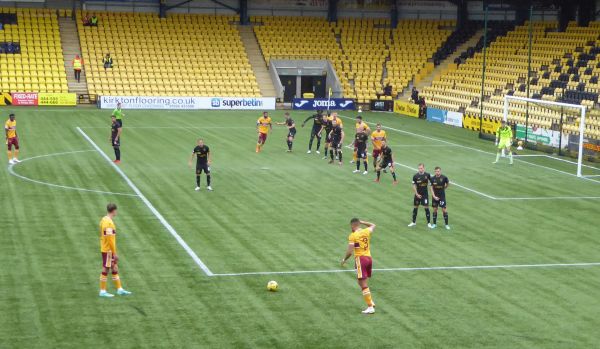 Graham Alexander "You could see how much it meant to the boys, they were all over him on the pitch an in the changing room.  He's a fantastic lad....we didn't expect him to come up with the winner, I'll be honest, but he's got great energy and made a run on the blind side of his opponent.  He's a great lad, everybody loves him and he got his reward."  On learning that it was Grimshaw's first ever goal he added, "So, if we can get him three inches from the goal..."

He first played for Motherwell when Ian Baraclough signed him on loan from Manchester United late on transfer deadline day in the summer of 2015.  He was recalled and then moved to Preston North End before a loan spell at Chesterfield.  He returned to Fir Park on a permanent deal in September 2017 and became a fixture in the team.

That first season saw 22 appearances followed by 34 and 31 before his contribution was ended after 17 games last season.  He fell low to glandular fever in January and it has taken eight long months to have him restored to the team.  He got his chance at Dens Park last week when Stephen O'Donnell was missing and topped off his usual energetic performance at Almondvale with the winning goal.