The prize for the winner of the Motherwell v St Mirren replay is a home tie against Aberdeen or Kilmarnock.

The draw took place at Broadwood on Sunday afternoon and the tie is scheduled for the weekend of 29 Febuary subject to TV choice. 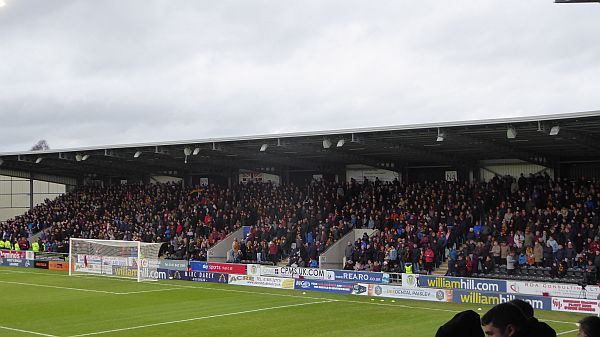 The 'Well crowd ahead of kick-off

Saturday's stalemate was viewed as a fair result by both managers.  The teams did well to serve up a typical Scottish cup tie in trying conditions.

The game turned in Motherwell's favour when Mark O'Hara scored his first goal in claret and amber.  Late in the second half he had an excellent opportunity to win the match but his shot across goal passed on the wrong side of the box.

All three forwards showed up well.  Chris Long had some decent shots on target and he kept up his hard running work rate all the way through.  Jermaine Hylton and Rolando Aarons teased the St Mirren defence with their tricky footwork.

Life was more difficult for defenders in the strong swirling wind.  Judgement of the flight of the ball and the pace of passes gave no opportunity for careless thoughts.  Mark Gillespie produced a terrific save in the first half to prevent an equaliser and he can be pleased with another good performance.  The shot that led to the Saints' goal gave the 'keeper little chance as it took just enough of a deflection to send it into the net.

The replay forces a third meeting of the teams in four outings.  After our trip to Perth on Wednesday we will face St Mirren at Fir Park on Saturday in the league before the Tuesday cup game on 18 February.

No Winner in Paisley