Motherwell got off the mark with a league point in Perth.  The well constructed move that led to Tony Watt’s brilliant equaliser offers hope that a first win may be not far away. 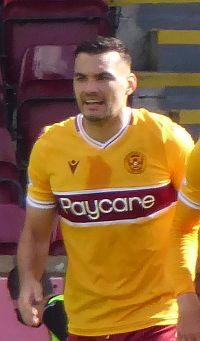 Watt started the game on the bench as Connor Shields was offered a first game in ‘Well colours.  He will have to wait to sport the famous claret and amber as the black away strip was given an airing on Sunday.

It is hard to be critical of the 24 year old as this outing came after a period of recovery following a hamstring injury.  Let’s just note that we have yet to see the best of him as he works to regain full match fitness.

The manager got his substitutions right.  Liam Donnelly was a bit below par and the removal of Shields on his first outing was predictable.  Watt and Steven Lawless were able to bring some of the flair and guile that the team needed.

It was significant that Watt’s contribution to the point winning goal began with a run through the centre of the pitch.  Perhaps the central position suits him better than the job on the wing that he had been given earlier.

Lawless deserves much credit for the perfect pass.  It gave his partner the an opportunity to volley and the sure right foot did not fail.  The video clips of the complete move must already be on the newly formed list of season highlights.

The remaining fixtures in August offer a chance to build a base for the rest of the year.  We play Dundee in both the league and league cup and Livingston in the league.  Two or three wins from that trio would provide a welcome boost.