Boos rang out around Fir Park on Wednesday as Motherwell and St Mirren concluded a 2-2 draw which either side could have won.

St Mirren were the better team for the vast majority of the game and had the better of the chances but found themselves two down with 20 minutes remaining until handed a lifeline. 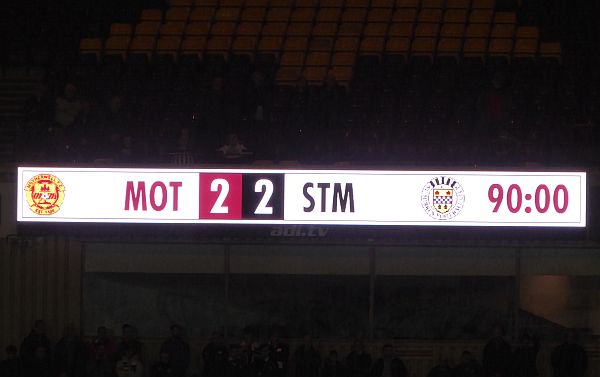 Motherwell in contrast were 20 minutes from an unlikely victory despite hardly being in the contest and will feel frustrated at throwing away yet more points regardless of how that position was reached.

With a full round of fixtures now played, we sit sixth and at exactly nine points from top and nine from bottom smack in the middle of the pack.

Few would consider that unacceptable but anyone looking beyond the results has reason for concern.

Liam Kelly is undoubtedly a quality keeper and will no doubt come good but until he does – after being at fault for goals in four consecutive games – the slump in form will not end.

And it says a lot about the midfield and attack that our defence, despite being weak on both flanks, still seems our strongest suit.

Callum Slattery must wonder what he did in a past life to be handed Liam Grimshaw as partner in the middle but is not just Graham Alexander’s inherent caution that has kept everyone’s favourite Lancastrian in the team. We have several other central midfielders, none of whom have been able to impress.

Up front there is a similar story where there are plenty of options, nearly all of them underwhelming. Kevin van Veen has flattered to deceive in limited showings and the rest said about the majority of the rest, the better.

Only Tony Watt – proudly sitting top of the scorers’ chart – can be considered a success.

Alexander has no shortage of problems to seek but he must analyse his own performance since taking charge.

His safety first approach was fine last season in securing survival and having been backed by a transfer budget unmatched in at least a decade, if not longer, fans hoped to see signs of greater ambition.

The win over Aberdeen showed a cautious, pragmatic approach need not be without excitement but that performance seems to have been a one-off.

Bizarrely our next three games being tough could ease the pressure a little. Rangers and Hearts at home, either side of Aberdeen away, means while the result is important, losing with a more lively performance would also be considered improvement.

A change to 3-5-2 or modifying the 4-3-3 would seem the obvious step but any move to get a little zip back would be appreciated.

Motherwell are unlikely to go down this season and unlikely to reach Europe. Fair enough. But that makes it all the more important fans are offered something worth watching when they turn up each week.