Motherwell fans have two weeks to wait until the team face Queen's Park in the Premier Sports Cup.  Will this be another closed doors affair?

After a full season when supporters had no option but to follow their favourites remotely there was hope that some of us might be back in the stands as 2021/22 got underway.  The uncertainty remains.

The latest indication from the authorities is that all parts of Scotland will move to level zero on July 19 but that some restrictions on outdoor gatherings will remain.  The plan is for a further easing on August 9.

Motherwell have applied for permission to host 2,000 fans in Fir Park.  There are three home games scheduled before the early August date that should see full stadia.  Queen of the South ann Annan Athletic visit of League Cup duty before Hibs come to open the league season on August 1.

But what of Firhill in a fortnight?  The game will be shown on the Premier Sports channel and presumably a PPV option will be available for non-subscribers.  Will permission be sought for a limited crowd? 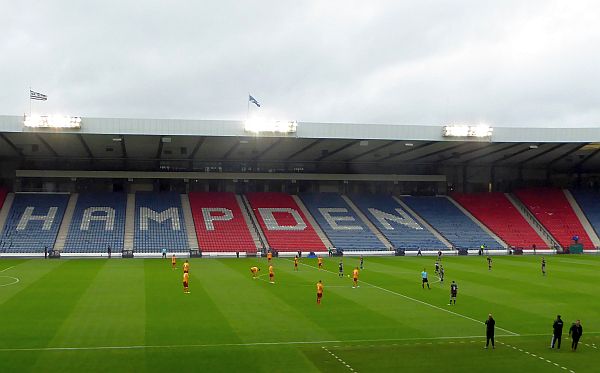 The last start against Queen's Park

This meeting will be Motherwell's first against The Spiders since they abandoned amateur status.  Five years ago we opened our Betfred Cup campaign with a 5-1 win at Hampden.  Cadden, Tanner, Bowman(2) and Moult were the scorers that set us on a return journey to the old stadium for the final.