Next up - Rangers for Sunday lunch

Motherwell and Rangers meet at Fir Park on Sunday with a noon kick-off.  Bring your wet weather gear.

The Fir Park surface survived a late inspection midweek and the continual deluge in the second half of the week will give the superb groundsman and his team a test to prepare the pitch for Sunday’s game. 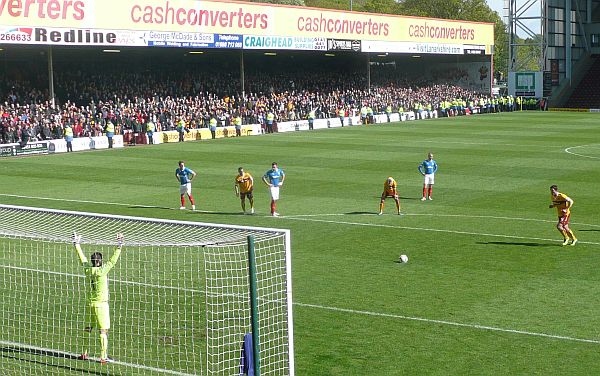 Graham Alexander may have cooled down after his eruption following the officials’ decisions in the St Mirren match and he will hope to see a higher standard from Nick Walsh and his team.

Alexander’s two previous encounters with Rangers finished with 1-1 draws.  The first (his second game in charge) was at Fir Park in January and the next was at Ibrox last month. A third share of the points would be unlikely to disappoint the home crowd.

The draw in midweek was enough to retain Motherwell’s hold on sixth place but it was not a convincing performance.  At least on change to the team is likely as Juhani Ojala had to leave the game injured before half time.  Kevin Van Veen sat out the game on the bench and he may swap placed with Connor Shields.

Rangers have not been at their best in recent weeks.  Two draws in the last three league games have seen their pursuers close the gap.  They will be anxious to regain command.

The visitors will have an eye on their upcoming European match with Brondby and they may err on the side of caution for team selection.  Nevertheless they have a depth of squad that is the envy of most of their competitors and they are firm favourites to win the game.

Motherwell will hope to provide stout resistance and the manager will exude nothing but a match winning mentality but it will not be a shock to see a 3-0 away win.

What happened on Rangers’ last visit?