Ian Baraclough had been in post for a fortnight when the Ne’erday fixture at New Douglas Park ushered in an eight game run that produced a solitary point.  We lost 5-0 to our neighbours and it was to be the first of several poor defeats in front of a substantial travelling support. 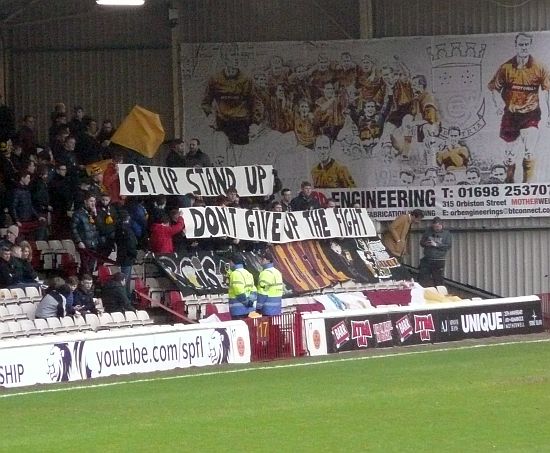 The Bois were there in strength

Hutchison’s injection of funds produced a dramatic import of players in the January window.  Johnson, Grant, Thomas, Long, Laing, Straker and Pearson joined all for the loss of Ojamaa but it took time for the team to find any rhythm.  The only comfort to be found was that Ross County and St Mirren were also in the mix for the drop.

Scott McDonald’s return at the end of February gave us reason for optimism.  There were signs that the new team was beginning to gel and we posted a run of four wins and a draw in the seven games before the split.  The 4-0 win against Hamilton and a 5-0 thumping of St Mirren suggested that we were on the right track.  St Mirren looked like certainties for bottom spot but Ross County kept producing results to move them from the play-off spot.

Supporters rallied to the cause and impressive numbers and filled the away sections at Firhill, New Douglas Park and Greenhill Road but they were to be disappointed.  County’s remarkable run continued and we finished the season second from bottom.  We were faced with a two legged play-off with Rangers to avoid the drop.  Stuart McCall was now in a position to relegate the team he managed for the first half of the season. 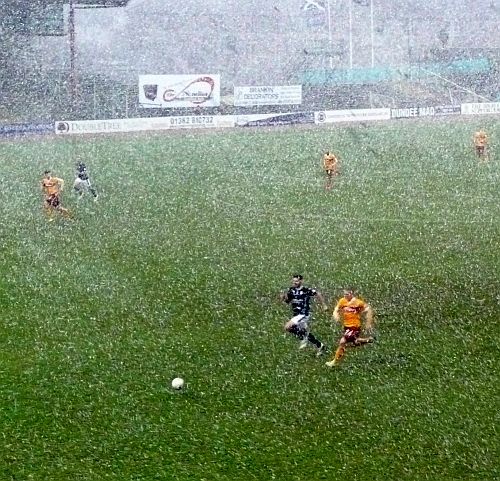 Ojamaa in the snow at Dens

Our record against the Govan side was an embarrassment but our opponents had finished only third in the Championship and had a busy time with home and away ties against Queen of the South and Hibs.  Squabbles over ticket allocations resulted in 950 Motherwell attending the first leg and all were aware that we had failed to win at Ibrox since 1997.  After an opening spell on the back foot we took control and returned home with a 3-1 lead.  There was an understandable reluctance to make too much of the rust as the second leg was to follow tree days later.

The 3-0 win at Fir Park gave us a 6-1 aggregate victory, retained our top flight status and condemned Rangers to another season in a lower league.  Fans made the most of the post-match celebrations though a few were criticised for their antics on the pitch.  A squabble as players left the field detracted from the football triumph. 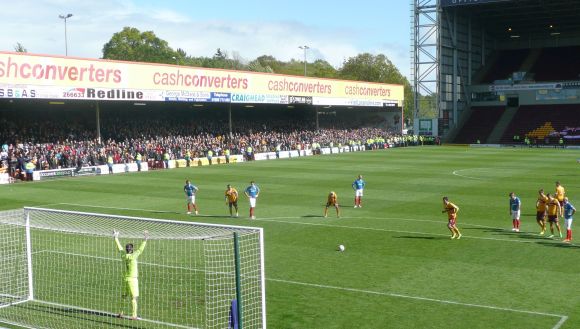 Les Hutchison and John Boyle signed the paperwork at the end of January and ownership of Motherwell was transferred.  Boyle took a bow as Les and the Well Society took charge.  Brian McCafferty, the Society chair, became chairman of the club.  Behind the scenes our scouting system, fitness coaching and financial routines were updated.  Kenny Black left and Steve Robinson was appointed as assistant manager.  Alan Burrows grew into the General Manager job and earned much praise for commitment that often stretched well beyond generous.

It has been made clear to supporters that in order to achieve fan ownership the Hutchison (interest free) loan has to be repaid.  That will happen by a combination of profit from the club and by Society members’ contributions.  The Society launched a revised membership scheme to be funded by direct debit. 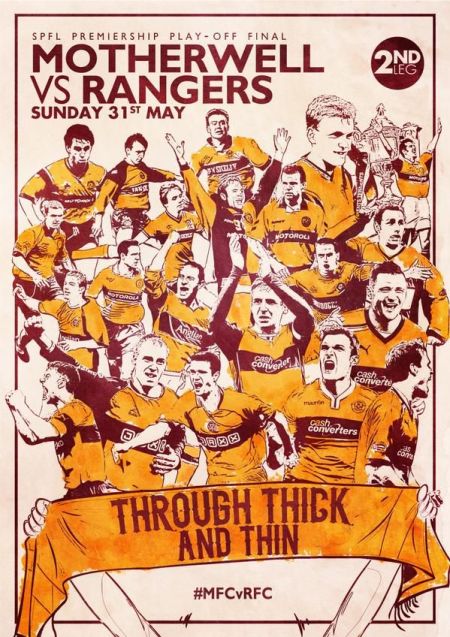 The Poster Boy kept up a high standard