The second half of the season offered few highlights and even less entertainment but three late wins saved the blushes.

With a decent haul of points in the bag by Boxing Day we were able to enjoy the covid extended winter break with the expectation of a successful conclusion to the campaign.  It turned into a bit of a struggle.

When the transfer window closed we had lost top scorer Tony Watt to Dundee United and Robbie Crawford to Partick Thistle.  The departure of Watt was a bitter blow as his purple patch in the first half of the season had been a major factor in driving the team up the table.

Joe Efford, Victor Nirennold and Ross Tierney came on board alongside Luke Shaw on loan from Celtic.  Jordan Roberts stayed on after his loan spell from Hearts ended.

After a no scoring 90 minutes against Morton, Kevin Van Veen and Liam Donnelly came to the rescue in extra-time to overtake the Championship side’s opener.  The Scottish Cup campaign had got underway and a home tie against Aberdeen followed.  An early goal was conceded but Van Veen and Connor Shields had us ahead at the break to seal a third consecutive win over the Dons. 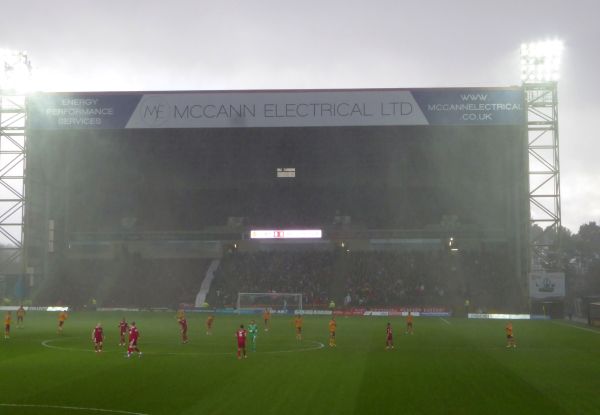 Aberdeen in the cup in a deluge

Hopes of a trip to Hampden were dashed two minutes into the quarter-final against Hibs when Bevis Mugabi was sent off.  A 2-1 defeat followed.

We had a horrible run of games in the league.  January, February and March passed without a win.  Six defeats and five draws had passed before a 4-2 triumph over St Mirren arrived in April.  Inconsistent team selection and unattractive performances fuelled unease in the stands and talk began to turn ugly but Graham Alexander had accepted a two year extension to his contract in January. 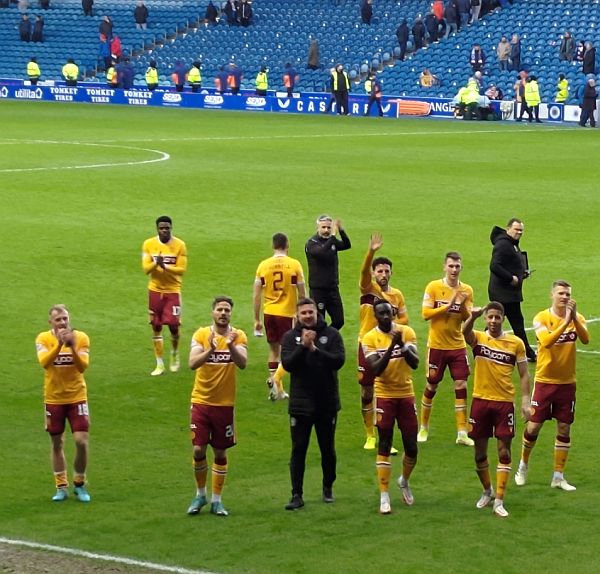 The point earned at Ibrox in February showed that the players had the fight and resolve needed to earn the fans’ respect.  A two goal half-time deficit was overcome to silence 50,000 and spark Twist ‘n Shout choruses in the jubilant corner of the Govan Stand.

Despite the poor run of form Motherwell had still a chance of sneaking into the top six on match-day 33.  It transpired that others in the mid-table scrap were unable to take advantage of our stall.  A point was needed in Livingston but we were deservedly behind as the fourth official indicated the additional time.  Ricki Lami took his chance after a corner and we swapped places with our hosts to make the cut. 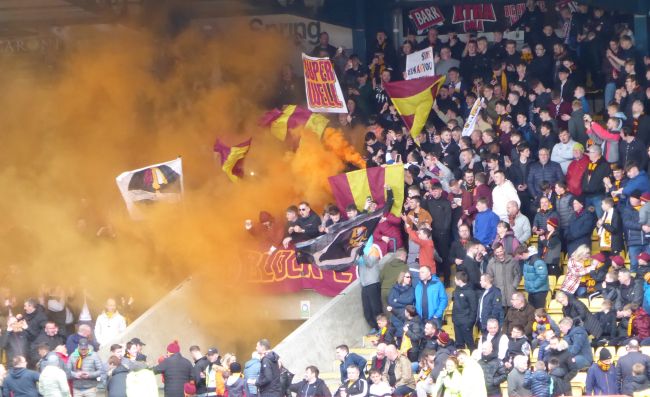 A last gasp equaliser at Livingston secured the top six

Wins against Ross County and Hearts in the post-split section delivered fifth spot and a place in the European Conference qualifiers.

The financial position of the club provided some good news.  David Turnbull’s transfer few and a business interruption insurance payout together with a long term interest free government loan combined to reveal a  £3.5 million pound surplus for the year ending May 2021.

At the AGM plans were announced for a substantial investment in the playing surface with the laying of a hybrid pitch.  A new PA sound system had been installed and the John Hunter stand had undergone a facelift.  The club had offered free season ticket renewals and donations had fuelled a Well In scheme to provide access to almost 750.

Club captain Stephen O’Donnell won his 25th international cap in March and Keith Lasley bowed out after many years service to the club to become Chief Operating Officer at St Mirren.  He was given a warm send off after the last home game.

The manager will set about a summer refresh but as the majority of the squad have at least a season remaining on contract changes are likely to be modest.

Supporters will await with interest the mid-June draw hoping that they can join the European Tour that will get underway in July.

Review Of Seasons Since 2001