Motherwell fans can claim to be the big winners in 2016; they ended the year as owners the football club.  On the field the league campaign produced a top half finish and the SFA Youth Cup was won at Hampden.

We entered January in good heart as the bounce following McGhee’s appointment seemed to have stabilised our form.  A 3-3 draw with Hamilton and a 5-0 cup win over Cove Rangers preceded a trip to Tynecastle that was to be a turning point. 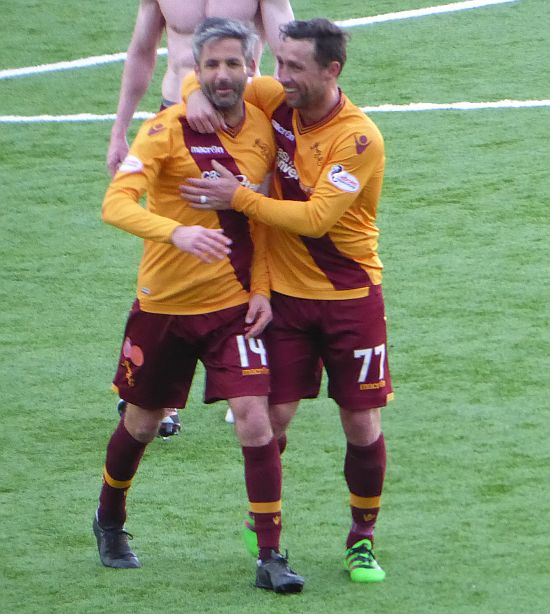 Lasley & McDonald after a win in Hamilton - March 2016

The 6-0 drubbing was the start of a frightening slump that delivered only one point from five league games and a cup exit after an infuriating loss to Inverness in the 90th minute.  The spectre of another play-off to avoid relegation figured high in our thoughts.

The January transfer window saw the departures of Dan Twardzik, Jake Taylor, Theo Robinon, Liam Grimshaw and Davis Clarkson as the re-instated manager trimmed the squad that had been enlarged by the departed Baraclough.

In mid-February we had a Tuesday night meeting at Tannadice in a bottom of the table tester.  A much changed 'Well side took the lead just before the break thanks to a rare goal from McManus.  McDonald added a couple to send us home cheering a vital 3-0 win.  It was a pivotal win and it set us off on a run that had seven wins from nine and placed us comfortably in the top six.

The financial benefit from our league position countered to some extent the loss of income from the cup competitions.  We managed a further two wins against Hearts and Ross County in the final five matches to finish fifth.

We parted company with Ripley, Law, Laing, Fletcher, Gomis and Johnson in the close season. 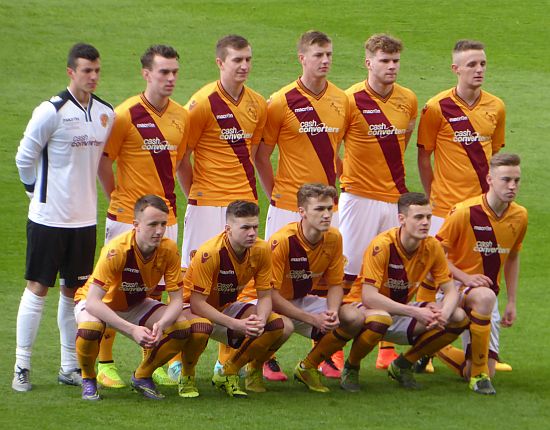 The U20s before the cup win at Hampden

In March we were surprised to learn that a Memorandum of Understanding had been agreed with Les Hutchison.  Before the year was out negotiations were completed and ownership was transferred to the Well Society.  Motherwell would become the first top flight club in the UK to be in the hands of its supporters.

The 25th anniversary of our 1991 cup win was marked with a series of events but those who followed our U20 side to Hampden in April saw the SFA Youth Cup raised high complete with claret and amber ribbons.  Several of that side have graduated to the first team squad.

The summer break came with the news that the revised and renamed League Cup (IrnBru) would present us with an opener against Rangers.